What you shouldn't do when you are in the Secret Service

Oddly enough, I know a guy who is in the Secret Service. I know another guy who isn’t. Him first. 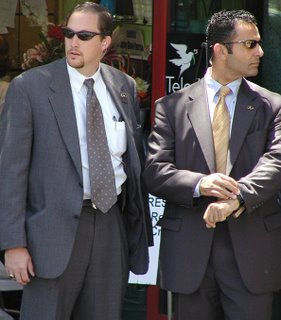 The other guy was the perfect candidate for the Secret Service. He had military service. He liked guns. He was very smart, but just dumb enough to step in front of a bullet. Sadly, he did not pass a certain level of the Secret Service interview tests. I guess they hook you up to a machine and ask you various questions about morals and honor and if you would have sex with a chicken. Sadly, he failed this part of the test. I can almost (almost) guarantee that he wasn’t a chicken fucker, but he did take offense to the implication that he might be. He was not asked back to continue the process. He is now a professional chicken fucker on the internet.

The first guy (let’s call him Ralph) did make it past the chicken fucking question and is now an agent in the Secret Service. While Ralph was still being interviewed for the position, the Secret Service went out and questioned his friends and family. I was one of those people. The dude they sent out to interview me sucked every last drop of dirt I had on Ralph. I didn’t mean to rat him out on the drunken fun we had in college, but this SS agent somehow loosened my tongue and before I knew it I was relating stories about smoking pot and getting into fights and arrests for jay walking. After it was all said and done, I was sure that Ralph would never get the job. Perhaps my answers actually matched Ralph’s. He is a very honest guy.

After a few months, Ralph was assigned Presidential duty. I guess there is a lot of stuff the Secret Service does besides guard the President. Ralph wouldn’t say what, but what he didn’t tell me sounded interesting. What he did tell me was this:

Ralph was assigned to stand around the tarmac by himself, observing the herded crowd, while the President disembarked from Air Force One. He was watching for bad guys. He had the thing in his ear and a gun and sunglasses. He was very excited. The President walked out of the plane and waved to the crowd. Hurrah! He turned in Ralph’s direction and waved. Ralph was the only one standing there… so he waved back. Ralph suddenly realized what he was doing and put his hand down.

Later on, Ralph admitted to some other agents what he had done. In between fits of hysterical laughter, the got a hold of the video surveillance tape and confirmed the wave. I think most of the Secret Service has seen it now. I’m not sure as a joke or if it is being used for training.

Detroit Baby! Enjoyed the article. I showed it to some of my coworkers and I guess there will be some folks coming out to talk with you again. They had some questions that needed to be answered in regards to drinking 40 oz. while wearing newspaper underwear.