God made fish. The devil made the deep fryer.

God made fish. The devil made the deep fryer. Let’s go eat in Purgatory!

There is a restaurant in Columbus called Old Bag o’ Nails. They have really, really great fish and chips. The slaw stinks. The tartar sauce is usually warm. But the fish and chips are perfect. The almost better part is that they give you a huge portion. Some have described the portions as big as a baby’s arm or like a big fish, but bigger!

I have never heard anyone say that the fish portion was as large as a #1 foam finger.

Please compare and contrast the following: 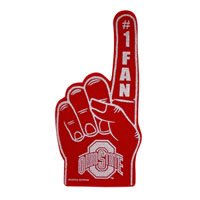 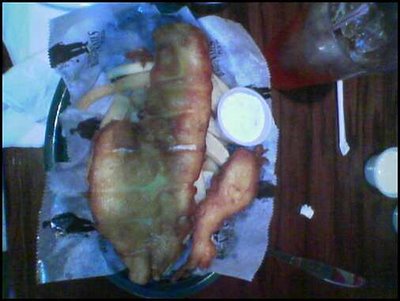 The first photo is that of an Ohio State University #1 foam finger.

The second is a camera phone photo of some fish and chips I ordered last week.

I rest my case. The Old Bag o’ Nail fish and chips portion is as big as a #1 foam finger.

I know it's the phone-camera combined with poor lighting, but that fish looks mighty leprous.

YOU BASTARD! Just because Lancaster only has Arthur Treacher's doesn't mean you have to get all Hansen's disease on me. Go perform a VSE on your hometown fish and then come up here... I'll buy you lunch.

How funny that you take your camera to a restaurant to take pics of your fish....
I miss you...
Un