Damn! I hope it ain't skunk

I was looking for an easy way out of writing tonight and did so by sifting through a bunch of old crap in a file called “Comics and Keepers.” Within that horrible file folder I found one small nugget of gold. 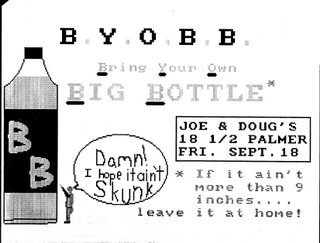 This is an invitation to a party that Handsome Joe and I threw to celebrate our moving in together into 18 ½ Palmer Street, behind Mr. Fee’s house. It was a 40oz party. I remember putting the two Bs on the label in hopes of getting some B & B.

Little did Joe know that a week later I would move out to take an internship at Lyon Video in Columbus. Joe had to scramble to get another roommate. Scary Gary. Then Knitter. Joe has never really forgiven me.

That apartment had the warmest toilet seat in town due to the location of a wall mounted heating vent right at bowl height. I would go back down to OU to visit and Mr. Fee would get pissed that I was sleeping in the apartment that I ran out on and subsequently was not paying rent on. I had to sneak in and out.

That invitation was created on an Amiga 2000 that I bought from Acton, but I don’t think I ever paid him for it.

Wow. Turns out I am a real asshole.