The Worst Bachelor Party Ever

As a rule, bachelor parties cannot be discussed with anyone outside of other males. As a female, the answer you will get when asking what transpired at bachelor party is the standard issue, “Not much happened. The girls weren’t that hot. We just drank a lot. It was fun, but not crazy.”

An addendum to that law (which I made up) is that Bachelor Parties cannot be discussed until at least eight years have passed since said Bachelor Party. I’ve waited long enough.

Eight years ago, Bob* (most the names in this story have been changed to protect Erik's wife from embarrassment) got married and I was his best man. I planned his bachelor party. This is the mostly true story of what happened that night.

I wanted to throw Bachelor Bob the second type of bachelor party. To properly plan a number two bachelor party, you hire strippers by either randomly going through the yellow pages, by endlessly searching the internet or you need to know somebody. I knew somebody.

Tom* (name not changed because he deserves the credit) worked with Bob and I. Before Tom came to our place of employment, he co-managed several nudie bars in the Columbus area. Sometimes I would meet up with Tom at the nudie bar and he would always have a super hot chick sitting next to him while other super hot chicks would walk by and kiss him on the cheek. Tom was not an especially good looking guy, but the ladies loved Tom.

Since Tom knew all these hot chicks, I thought that maybe he might know one or two that would wear very skimpy clothes to a party, quickly remove them and then sit and wiggle on bachelor Bob's lap. About a month before the party, I asked Tom if he could help me out. “No problem, Dougie. I’ll set you up. As a matter of fact, I’ll be the chaperone and you won’t have to pay anything additional.” (The chaperone is usually the 6’ 8” tall dude with the disgustingly thick muscles that shows up with the girls and makes sure you don’t touch the goods and ensures prompt payment in cash.) Tom pulled out his cell phone and hit a number on speed dial. “Hey Lisa, it’s Tom. Yeah, a good friend is getting married. Can you hook me up with a couple girls for his bachelor party? Great!” We were set. The word went out. Two strippers. No chaperone. Anything could happen.

About ten days before the bachelor party, I started to get worried because I had not heard anything from Tom. We had the location of the party picked out. We arranged for transportation. Everything was set except for the entertainment. I stopped Tom in the hallway, almost exactly where he had made the phone call two weeks earlier. Again, Tom pulled out his phone. Speed dial. “Hey Lisa, it’s Tom. You still got two girls for next Saturday? Great!” We were still set. Tom would pick the girls up on Saturday and bring them to the party.

I called Tom the day of the party. He would be picking up the girls at 8:00pm and have them over to the apartment around 8:45pm.

At the apartment, our friends were cleaning up. Bottles of liquor and mixers were arranged. The refrigerator and two coolers were filled with various beers. We hid a sheet of plastic behind the couch in case things got interesting. As an added bonus, we set up a video camera in an empty beer case. Hidden on top the TV, it had a perfect vantage point to the center of the living room.

Guests started to arrive and the bachelor was not far behind. We drank, smoked and reveled in our great friend and resource, Tom. Boobies.

Tom called around 8:00. He had just got to the place to pick up the girls. He was a little hesitant. His statement to me was, “One of the girls has a little meat on her bones, but she’s still pretty good looking. She’s experienced. The other girl is really hot.” OK. I can live with that. Meat on bones and pretty good looking means fat and ugly. But really hot means really hot. One hot and one not. I could keep one eye closed.

We continued to drink. Tom called and gave us a 10 minute warning.

The guys circled up in the living room. The middle of the room was cleared out. We turned on the video camera.

Tom called… they were coming up to the front door.

The first girl walked in. Hmmmmm.

The first girl walked in and I thought to myself, “Hmmmmm. Well, she is a bit fat and a bit not so good looking.” Not a problem. Save the best for last. Here comes the hottie. Then the second girl walked in.

Oh, SHE was the fat and ugly one. Oh Christ.

The room was dead quiet when Tom walked in behind the girls. “Hey! Let’s party! Get these girls a drink.”

The girls were dressed in various bits of tight animal skin prints and pink and stuff with sequence. Their handbags were made of similar mis-matched materials. These girls were not pretty. Not at all.

Now is a good time to salvage the party. Bring in “Doug’s Stripper Chart.” My stripper chart goes a little like this. Down at the bottom along the X axis, you got a range of looks from “I Just Threw Up In My Mouth Ugly” to “Super Freaking Hot.” Along the vertical Y axis, you’ve got a range of Whoreditude from “Only Takes Top Off” to “Sex With Donkey While Blowing the Groom.” All strippers fall somewhere within the chart. Sometimes you get really hot strippers that only take off their tops. It kind sucks, but you can plot a point outside of the average. Sometimes you get decent looking strippers that do crazy stuff with toys and then put ice down the bachelor’s pants. Plot it! And then sometimes you get what we had… ugly girls. 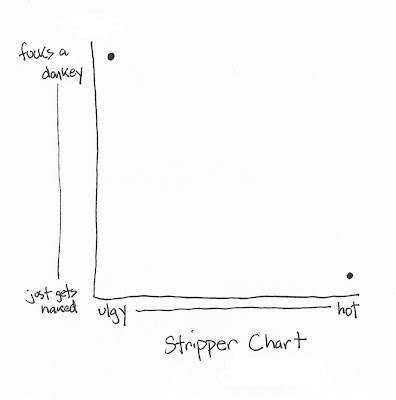 There was only one thing that could save this party. These girls would have to be off the charts crazy. I waited for them to bring a donkey in the house.

There was no donkey.

What happened that night was the most pathetic bachelor party ever. The girls went upstairs with some alcohol to “change.” They asked for weed. Someone had a little and gave it up. Fifteen minutes later they came back down. They pranced around the room collecting dollars from guys. Before any clothes came off, they ran back upstairs to smoke some more weed.

They came down again ten minutes later and the guys chanted, (we were drunk and I was one of them) “Take it off!” The girls said they would take off their tops only after all the guys did. (Do not imagine it. Just read it.) Eighteen guys, in various stages of beer gut with body hair ranging from pre-pubescent teen to Ron Jeremy, sitting around two really ugly chicks, waiting for them to actually take off a piece of clothing.

The girls suggested a set up for Bob the Bachelor. We laid out the plastic from behind the couch and stuck a chair in the middle. He was blindfolded with his arms tied behind his back. (I’m sure he is still thankful to this day for the blindfold.) His shirt was mostly removed and the girls rubbed some whipped cream from the refrigerator, peaches from the cupboard and I think some shoe polish. They then took off their tops for a few minutes and rubbed their boobies in his face. Whoopie.

Seeing that this is my recollection, I will not bring up the rumor that I jumped in and was rubbing him down with peaches when the blindfold was removed.

In the end, the girls had their tops off for about five minutes. All the time, Tom was watching from the side, yelling at the guys when they started to beg to see a little of the copious amounts of flesh that were stuffed in that spandex. Thanks Tom. The girls left. We found out later that Tom was dating the less ugly one. Thanks Tom you awful bastard. We ended up going to a nudie bar, which helped to wipe those girls from our minds. But I will always be the one to blame for that horrible, horrible bachelor party.

So when I went home and Miss Sally asked how things went, I looked at her right in the eyes and said, "Not much happened. The girls weren’t that hot. We just drank a lot. It was fun, but not crazy.” Sigh.

I’ve spent the last eight years attempting to make up for that debacle. I haven’t been a best man since (word gets out) and I doubt I ever will again.

******
Oh, the video tape. Thank you God for our inability to line up the lens. The camera was focused on the edge of the beer case. There was sixty minutes of out of focus pink and tiger striped blobs. Or maybe the camera was in focus.