COLUMBUS, OH - The National League of Churches convened an emergency meeting this past Monday to discuss the scarcity of new, clever church sign messages. Head Writer and Deacon Paul Sims scratched at a sheet of paper attempting to resurrect some of his earlier gems, but to no avail.

“Ever since Pastor Virgil came up with ‘Do not wait for the hearse to take you to church,’ we haven’t come up with squat.” 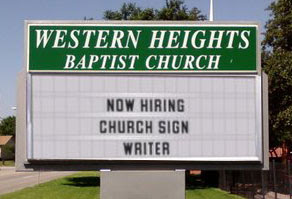 Unbeknownst to local church goers, most of those clever signs aren’t original. “We have a network of sign writers and we rotate the clever messages on a weekly basis so that a parishioner is unlikely to see the same message twice. Your “Dusty Bibles lead to Dirty Lives” sign this week was the clever slogan last week in Glen’s Falls, NY.”

At the emergency meeting, writers from various churches and multiple denominations brainstormed to come up with a few slogans to get them through the next few weeks. Father Mike shared with me the sayings that floated to the top:

Sadly, the internet has brought the secret networking of the creative church-speak to a halt. Dispatcher Ron Creet of The First Methodist Church in Denver Colorado was quick to reveal the problem, “You can’t open the internet without seeing one of our clever church signs. Mrs. Roberta Samuels said she logged on to the AOL and saw her Lutheran Church sign from last week in a photo of a Baptist Church sign and almost had a conniption fit.”

The NLC has reached out to Hollywood in an attempt to rejuvenate their creative pool. Deacon Paul Sims laughed, “Those Godless bastards are funny as hell! We got Leno’s people to do a three week, limited, front end crawl with an option for Lent. But we had to fire them when we found out they were all Jewish. And of course, that's not the only fire they'll have to worry about at the end of the day. Oh! That's a good one... I'm going to write that down!”