COLUMBUS (HJ) - Many guessed that Ex-Governor Sarah Palin would run in 2012, but all that was speculation until today. Sarah Palin announced this morning that she will begin her Vice Presidential run for the White House in 2012 by interviewing prospective Presidential running mates. Mrs. Palin 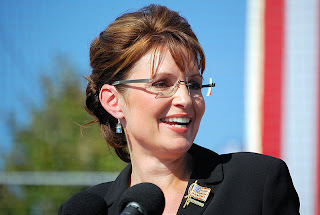 stated in her press conference, “The American voting heroes are demanding new change and I plan to bring that new change as a person running for the position of Vice President. I am interviewing some of the best and brightest people that proud flag hanging over this great land of ours for the President job.”

While the list of potential running mates is a secret, we were given a peek at the interview questions when we dug through the trash dumpster of the hotel where the press conference took place. On the crumpled pages, some of the more serious questions included: “What is your foreign policy?” and “What role do you think you will have in my administration?” Other questions towards the bottom of the list were, “What newspapers do you read?” and “Who is your favorite G.I. Joe character? (If they say Destro they are pre-fired.”)

This is the first time in American history where a person has decided to run for Vice President and not first seek the office of the President. We attempted to ask Sarah Palin about this strategic move, but we had not sent this question 48 hours in advance to her Strategic Media Force, so we were unable to get an answer.