My date with Cory Kennedy 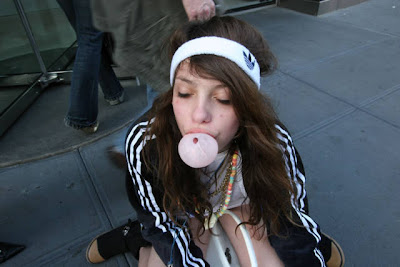 Yes, I know. There are several reasons why I should not have gone on a date with Cory Kennedy. I’m married. She’s 17. We don’t listen to the same music. We only have a few things in common. Scratch that... we have nothing in common besides drinking. But drinking is the great equalizer and so I thought that by the end of the night, it would all work itself out.

And oddly enough, it did.

I was in LA for business. On a whim, I called my buddy who runs a recording studio. He’s a testicular cancer survivor and swears that his raw food diet has kept him in remission.

I gave my studio buddy a call and he mentioned that he recently had a celebrity in the studio. That celeb knew a guy who dated a bouncer who had a Facebook account. And one of his friends on Facebook was none other than a Facebook friend of Cory Kennedy’s.

I tried to get her to accept me as a MySpace friend. She denied me. So I found one of her MySpace friends’ friend and they blindly added me. I was in her extended network which is almost like being in her Blackberry. I sent the friend of a friend a note to pass on to Cory that we should go out very soon. I didn’t get a response. I assume MySpace was down.

I enrolled as a substitute teacher at her high school. Since I was only in LA for a few days, I didn’t really enroll as a sub, but I did carry a briefcase as I marched around the school’s campus. I narrowed down my search by not looking for anyone wearing matching clothes, or anything with blue, red, yellow or any combinations of those colors. I had it narrowed down to about 218 girls when the cops hauled me off campus by my iPod ear buds.

I was let off with a warning after I mentioned that I had a date with Cory Kennedy planned for that evening. Cop number one said, “I’ve got a color blind daughter of my own at home. Go get her, champ.” Cop number two said, “Isn’t she only sixteen?” but I didn’t hear that as I was all ready running off through Burbank.

That night I had everything planned. I rented a limo and bought a TON of Red Bull and some menthol cigarettes. I waited outside her window for her to sneak out, but it turns out she just walks right out the front door on her way out to the clubs at 11:00pm. I ran back to the Limo and had Asphed follow her to eighteen different clubs: Rants, Jimmy 8, Outré, Sim Sim, Lookie Tick, RED, Front Door, Rex, Symbol, Number Ten, Camel Tent, WOO Tavern, Capitol G, Upstairs Twice Club, Yeast, Juvie Nile, Kliq and Epstine Fillmore and the Rat VooDoo Soul Club. I couldn’t get into any of them. I would sit in the limo and wait for her to leave. Sometimes I would put on my chef costume and try to sneak in the back door, but it turns out most clubs don’t have chefs. As a matter of fact, none of them do.

So at the end of the night or the start of the morning as we call 6:00am here in Ohio, I tracked her down at a Jerry’s Famous Deli. She was with a large group of people and I couldn’t force my way into the corner booth to ask her how she felt the date was going. So I ordered a Yummy (a cream cheese and jelly sandwich, battered and deep fried) and sent it over to her table.

She mouthed the words “thank you” or something very similar.

All in all, the date turned out really good. I felt like a gentleman buying her dinner/breakfast and she gave me a lot of space so that I could grow. A very positive experience for both parties.

So in the end, it all worked out.

But, I do not think it is going to work out. She’s way too Hollywood for me. And the restraining order keeps me at 150ft away. Plus her arms are way too hairy.

That is the most ceative, one-word insult I have ever been called.

Will somebody please give this guy some cent so he can buy a life??

That was not creative, not one word and harly insulting...

This story reminds me of the time that me and my cousin went down to my uncles cow barn to fellowship with my uncle's milk cow. My cousin Randy set up a lookout position while I whispered sweet nothings in the old heifer's loins. Soon enough I had her "winking" at me if you know what I mean. Well I shed my overall straps and let them fall around my ankles as I gently slipped my masculinity into the warm bovine quagmire. Lord a'mighty! When old Elsie started to bow up and bawl I got that manly glow of satisfaction all over my body, after all I was doing this old milk cow some good, hoo hoo. Imagine my surprise when she got a hump in her back. I thought she was going to climax. Instead, that hump meant that she was going to drop a steaming dung heap in my overalls. The bad thing was that it was springtime and she had been grazing in old Unc's hay pasture and all of that fresh green grass had given Elsie the scours. About the time that she filled my drawers and covered my loins with cow patty my uncle arrived at the barn. Bad news. Do you see the irony of this scenario?

I think what you are trying to say is that our limitations as humans is only rectified by the confluence of the greater good. Is that the irony?

Well,
alright so that story was pretty good. just...why would you stalk someone like that?!
reallycreepy..

hahah.
this is great.

Can I please have one date with Patrick Wolf, please?

If this entry is in any way fake, I want you to know that not many entries keep me as interested as I was reading this. Good job!

If it's real, I want you to know that not many entries keep me as interested as I was reading this and this is extremely creepy and you should have been put in jail for that, and I think the least I can call you is a sicko.

Everything I write is true. Except what I just wrote.

possibly the only thing with that length that kept me reading and entertained.

Hairy arms, no doubt the sweet breath of a bulimic too.

omgosh you realize this is called stalking? what a psycho.

LOL! Stalking is when you follow someone around. Annoying people over the internet is called blogging.

What are you wearing?

thank you for this

You have way too much time on your hands, but it was interesting either way.

loved the part about pretending to be a chef.

And you read the whole thing, asshole.

you are an old creep.

Well, you got me there.

I'm pretty sure that Cory Kennedy is used to this routine in that she used to do it to that guy in Kings of Leon before he finally got creeped to submission.

She spent many a long night outside his place with a net gun, a bottle of sedatives, and a copy of the Urban Outfitters catalogue waiting for him to come outside.

She had to net quite a few people before she got it right--luckily, one of them was the ambassador of cool and he thought she was quirky in the way she wore her quirky clothes, and spoke slowly and quirkily.

Courtney Schofield said...
This comment has been removed by the author.
6:45 PM

oh christ were all these commenters in the same sharpie sniffing cirlcle jerk? this is HILARIOUS, and fantastic comedic writing. it's like messing with Lindsay Slohands or Paris, they aren't real people! They are flesh sacks with all the people fixins, but without the salt - a totally necessary ingredient, kinda like a soul if you will. And i think you will. Whoever wrote this, keep it up champ, you are near genius and should not stop writing. Or get your ass on teh comedy circuit and come to San Francisco, post haste! We've got soem serious brain grapes here, no one will be irrationally offended due to near retardeation of the humor bones.