I would like to think that this year’s ComFest was supposed to be about music, community and the celebration of diversity. The most entertaining part of it for me was what happened after ComFest while people were leaving and how they interacted with a shopping cart and two hula hoops. Please allow me to present my first photo heavy entry. 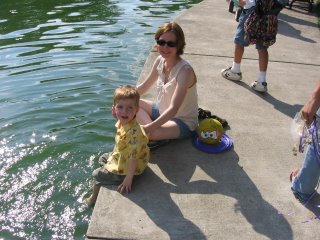 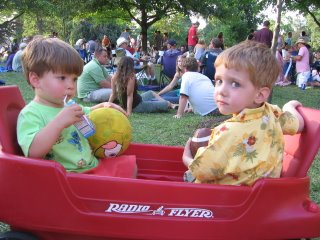 Miss Sally, Greg and I drove down to ComFest and I sold what was left of my soul for an awesome parking spot. We loaded Greg and the goods into the little red wagon and rolled into the crowds. Greg got his first sight of hippy and his first smell of weed. We spread out a blanket and listened to music for a few hours. It was a good time. Russ, Cheri and Reed joined us and we all shared grapes, juice and squirt guns.

Reed got to see a spiky, blonde haired lesbian throw up. Greg and I threw a Frisbee with a mentally disabled kid.

Um, at a mentally disabled kid.

Around 8:00pm, Miss Sally had to make water and we did not have the 30 minutes to wait in line at the porta potty. Instead we packed up and wagoned over to my friend Meshell’s house to meet up with some friends. They were all surprised to see Miss Sally’s pregnant belly. (Miss Sally is at best 105 pounds with a wet winter jacket on. The baby has decided to grow straight out and so she only looks pregnant from two angles.) While we were there, Shorty taught my kid how to karate chop an inflatable palm tree.

I took Miss Sally and Greg home and returned to Meshell’s around 10:00pm. I noticed a shopping cart.

Earlier in the day, the folks at Meshell’s watched stunned as a man with a broken arm, broken leg and numerous head stitches lurched down the brick paved street with a walker. He and his girlfriend were not making much progress. This dude was a wreck. Someone came by with a shopping cart and offered it up to the guy. With a little careful lifting and tucking, the guy was loaded inside. Girlfriend rumbled him down the street and to ComFest. Hours later they returned, poured the guy out of the cart and headed back the way they came. A true American story of heroism, ingenuity and a guy that got the smoke beat out of him by a baseball bat. 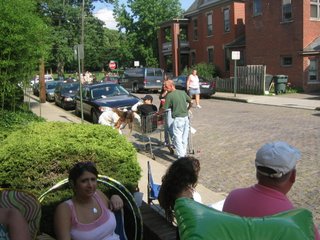 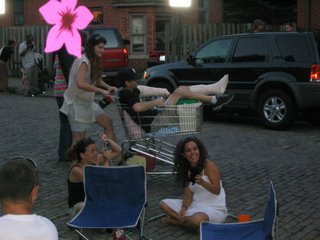 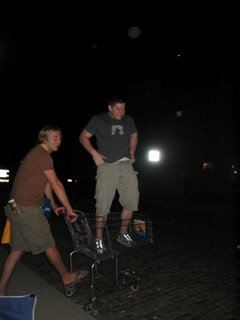 The shopping cart remained a focal point for all those who passed. Some would jump in it and scream. Others would team up and push eachother in circles. Some would just push the empty cart. For something that was obviously stolen, people seemed intent on returning it to its unrightful owners. It never was more than five hula hoops away.

“Hey, those are hula hoops.” 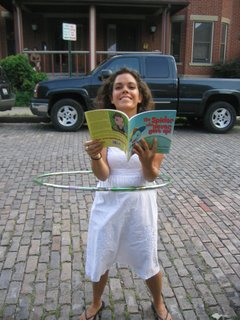 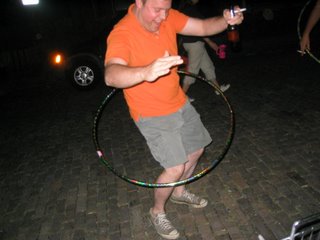 Taresa had brought two hula hoops to Meshell's. They were in use from noon until 2:00am. Taresa was either hooping or helping someone else to hoop all night long. She was really good. Here you can see how good I was. That is until you compare it to these other photos. It only took 8 shots to get one photo that made me look good. The only good thing was that Shorty was as bad as me. We had several hoop offs that consisted of us holding beers and cigarettes while dropping the hoops to the ground at our feet. Repeat. We sucked. 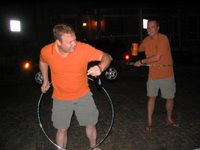 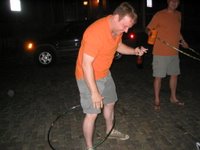 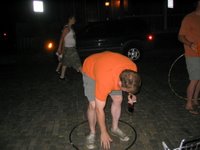 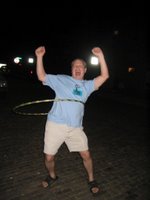 Josh had it going on, though.

Throughout the night, people would random walk up to the hoops and try them out. Others were coaxed in by one of the resident barkers. As the night wore on and beer sales finished at ComFest, many were conned into foolishness with the allure of free beer to anyone who could hula for more than x amount of seconds. (I’m no programmer, but the hula timing went like this: if hula person = chick then x = 3, if hula person = dude then x = 50)

We had one woman drop her top while hula hooping. 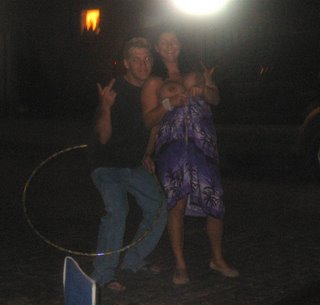 We had another without a shirt whose naughty bits were covered by post-its (postits?)and red marker. I think x for her equaled what she had stuck in her mouth three hours earlier. 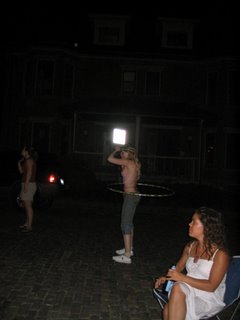 All in all, a beautiful night. From the guy who couldn’t find his buddy’s house (it was just on the left of the CVS) to the 24+ guys who humped the traffic cones to the dude who actually ran down the street at full speed with a hula hoop around his waist and performed for five minutes straight.

Other photos from ComFest 2006 can be found here:

Doug,
We you that mentally disabled kid?

And you & your buddy in the orange shirt, should you get good enough, could be synchronized hoopers. You had the matching outfits!

Good to see you're still partaking in crazy shenanigans!

How come all the parties I can't come to are the best ones. Either I have bad karma or I'm the one bringing the party down.