Allen and I went to LA. (There’s almost a palindrome in there somewhere.) We were there for work, but we were also there to drink. One place to drink is Trader Vic’s. It is located in the Beverly Hills Hilton. It’s a restaurant too, but we were not there to eat.

It was a Thursday and Thursdays are busy at Trader Vic’s. The lounge was full of people and every bar stool was occupied by a hottie or someone trying to pick up a hottie. We set up shop at a very small table that was created from a slice of log which had been drowned in resin.

Allen is very good at ordering drinks. I always fall back on the Captain and diet (then later I just fall over.) Allen is a fan of greyhounds and martinis. He’s the type of guy that puts salt in his beer. At trader Vic’s, there is a playground of drinks to choose from. He’s not one to mess with a Tiki Puka Puka, but he will drink Suffering Bastards until I start to look good. We racked up a $200 bar tab by the end of the night.

Our view over the shellacked table encompassed the corner of the bar and a few tables to our right. Right smack dab in front of us on a barstool was a chick with a lot of back showing. She was either wearing a thong that was riding way up her ass or her bra strap was slipping down. We realized what was happening when she went to adjust her pants. Sensing the 30 or so guys in the place burning a hole in her backside, the chick would blindly reach back to pull her pants up to hide he thong. What she was doing was the exact opposite by pulling her thong up even higher. This went on for at least fifteen minutes until she got up to go pee-pee. (Or to go shit out the part of the thong that was wedged up her butt.)

On the short side of the bar, there were two VERY attractive women. Coming from Ohio, I’d say these girls were 9 – 9.5s. I’m sure that in L.A. they were just 7s, but 90% of the guys out there are gay, preparing to be or acting like they are to get work so it doesn’t matter what they think. These two were hot. The 10% of guys in L.A. that weren’t gay showed up at Trader Vic’s that night to hit on these chicks. The girls were knocking them down left and right. We thought we were cool because we didn’t even attempt to get shot down. Out of the blue, the hotter of the two chicks stepped away from the bar and sat down next to Allen and me. She said hi. We said hi. Allen chatted her up in a very innocent way and she seemed to appreciate sentences that didn’t end with question marks.

After a bit, her friend came over from the bar and joined us. (I use “joined us” very loosely. She sat down at the next seat 10ft from me.) At this point, the first hottie looked at me and said, “You look like someone famous.” Get out of here. I do? Who? “I’m not going to tell you.” Come on. “I’ll tell your friend.”

At this, she leaned over and whispered into Allen ear. I can only imagine what her alcohol soaked breath smelled like. I like to imagine her lip glossed lips close up, breathing the name of the famous person that might get me in the sack with this chick. Allen listened and then looked at me with a, “Yeah. He does,” kind of look.

Allen wouldn’t give up this golden ticket of knowledge. If she thought I looked like some hot famous dude, I might have an in. I pressed him, he denied me. She wouldn’t tell me either. I had to know. Finally Allen leaned over and said…

Over to my right, Meredith Baxter sat at a table with five people. No one bothered her for an autograph. 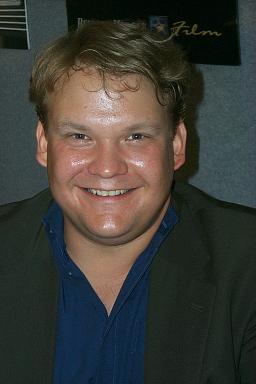 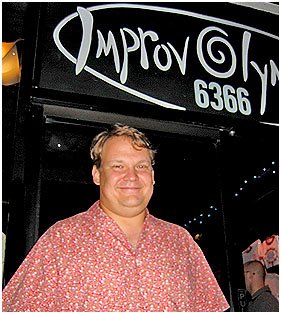 Can you guess which is me and which is Andy?

No Doug. You do not look like Andy. You do, however, look like Richard Simmons with less hair.