It’s difficult to suggest that we have “legends” where I work. We've had legendary people work with us (Ray Morrow) but I really don't recall any great feats of impossible accomplishments that are remembered and passed on to new workers to inspire them. Instead, we memorable stories that have titles that become work phrases that we bring up in meetings or laughingly mention in an email. These summaries usually have an implied moral or warning to those who would forget the past.

One Man, One Hour

In 2003, I was on a project at a science museum in Charleston, WV.  We would drive down from Columbus on Monday, stay the week and drive back on Fridays. We managed our client, their GC, our vendors, and ourselves. Towards the end of the project, we planned for the client to bring in a few school groups to test the activities to see what was working, what was not working, and what was breaking, both physically breaking and breaking our hearts.

My last piece of work was to install some painted, metal trim around a small platform. I had previously dry-fit the metal to the platform before sending it out for paint. That morning, we got to the site at 7:00 am and gathered for our daily meeting. Everyone knew the school groups would be showing up at 10:00 am and that we should be finished with our work by 9:00 am so that we could absolutely be cleaned up and ready. We went around the circle with everyone sharing what they were working on. When it came to me, I said that I had to install the trim and then I would be available to help others with their work. Allen asked, “What is it going to take to get done?”
I said, “One man, one hour.”  The group broke up and I got to work.

I opened the box my trim pieces were in and immediately found out the marks I labeled them with were covered in paint. My first task was figuring out what was what. In normal Doug fashion, I did figure it out, but did not re-mark them knowing that I would easily remember which was which and the two minutes it would take to mark them was way too long.

While dry fitting them worked out great, I had never added the fasteners to hold them on to the platform. As the fasteners cinched down, the metal would bend slightly, which kept it from laying flat on all sides. Because the front and top were visible, I couldn’t add fasteners on those sides to make them lay flat. On top of this issue, tightening the screws caused the metal to deflect and when the screws were removed, the metal did not go back to its original shape. I had to bend every deflection back by hand.

When I looked at the time, it was almost 8:00 am and I should have been done. Co-workers were peeking in at me, but not saying anything.

Once I did get one piece in and fitting correctly, the next interlocking piece would reveal where things were not flat or where they were still bent. There was a cascading waterfall of failure that kept requiring me to remove all the pieces and starting from scratch.

At 8:30 am, Jim walked over and said, “Do you need some help?”
I said, “No, I’ll get it.”
Jim hunched down and watched for a few moments. He immediately noticed that the holes I was pre-drilling for the hardware were too small. Many of them were large enough at this point because I had run screws through them four or five times, but with Jim making the holes larger, the newer pieces were behaving better.

Ouch! Did I mention the edges were sharp and the holes that the screws had expanded had skin slicing blades coming out?

It was now 9:45 am and the groups had already shown up.  Would we be able to let them in early? I think AJ showed up at this point to jump in to help.

At about 10:04 am, Jim, AJ and I were finishing up with others helping to hide my tools as the school kids started running around the space.

I was able to hang back and watch the kids interact with the exhibits. I was soaked with sweat and sadness, but the kids’ excitement and glee took my edge off.

If you are ever in a meeting and someone brings up a hesitation about the labor and time it will take to do something, a few folks will smile and say, “One man, one hour.” I, too, like to say it, because I dabble in self-deprecation.

Here is that platform with the metal trim. It’s beautiful. Yes, that is astro-turf. 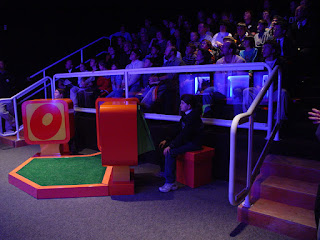 We build interactive exhibits, mainly for children's and science museums, but many other venues, like zoos and retail environments, are very interested in how we can communicate a message through physical interaction and software. Some of these exhibits are new, untested ideas that we put a lot of effort into making them work or re-working them. Some of these exhibits are tried and true, industry-wide, standard hands-on activities that really don’t change from one installation to the next.  Something like a gyroscope or a zoetrope. You can’t really bend the science to make these phenomenon work in a different way.  But every project is different, and sometimes these standard exhibits are changed slightly based on that project’s needs for different cabinetry or themeing. We find ourselves looking at a previous drawing of an interactive and thinking, “This is what worked before, it must be what will work now for this simple activity.” But something was changed from one project to the next and that modification isn’t needed or could be a challenge if it isn’t caught for the new project. AJ and I were discussing this one day and lamenting about how poor documentation of changes can be an issue when everyone just does what the person before them did. That reminded me of a story my ECON 101 teacher, Mr. Ault, told us about his wife’s ham. When she would prepare a ham, would cut a generous portion off either end. When Mr. Ault asked why she did this, she explained, “It was how my mom did it.”

This stuck with him and at the next family gathering, he asked the mom why she cut the ends of her ham off. The mom replied, “I’m not sure, it’s how my mom did it.”

And to the matriarch he presented himself and asked. “Why did you cut the ends of your ham off?”

And she explained, “My pan was too small to fit the whole ham.”

Sometimes we do things because it’s just how they were done before. And while that seems to save time and money, you can end up doing things for the wrong reason.

For our team, when something is a replication, we take that extra step of making sure that what we did before was the correct way and that we do not keep mirroring unnecessary modifications from the past. When something should be carved in granite, we make sure we document any project specific changes, so that future creators know what they are getting into. But when one does sneak by and the question is asked why it was done that way, we know it’s a Ham.

In about 2001, I told my boss that numbers he was moving around in the project budget were either incorrect or wrong or unnecessary. I forget the circumstances, except that I probably should have shared my opinion in some other way then by telling him it was “Voodoo Budgeting.”

Join me in the way back machine to 1986 when actor Ben Stein teaches that George H. W. Bush called Reaganomics, “Voodoo Economics.”

I don’t know very much about Economics (except about the professor’s wife’s ham,) but I did remember that line from the movie. It seemed a fitting way to describe what I was feeling at that moment. My boss did not like that phrase very much.

His displeasure with it was so memorable that this Work Phrase isn’t about budgets or accounting or economics or the phrase Voodoo Budgeting. It’s about when you say something to someone and it sticks with them FOREVER.

When my boss brings up Voodoo Budgeting, I know that he’s reminding me of that special day and that he’ll never forget the time I doubted him and did so using a clever movie reference. Sometimes I will bring it up in a meeting, just so that I can say it before he does so that I can still have some power over those words.

A few years ago, we hired someone at the management level who had production experience and seems to know “a guy” in every trade possible. I’ll call him KF for Kung-Fu. He was experienced and seem to be able to give us contacts throughout the industry. The one thing he did not have a command over was searching the internet.

In a project meeting, we discussed resourcing brass stanchions with the velvet ropes. Hugh had been doing some research and shared what the costs were. The new guy thought that the costs for the stanchions were too high and asked if Hugh had done research on used stanchions.  KF said, “You see, the internet, it’s made standing in line at the theater obsolete. Theaters everywhere don’t need those stanchions anymore, so they are in a backroom getting dusty. The movie managers want to make a quick buck so they sell them on line. We just need to find them.”

(I don’t want to get in to how many theaters DON’T have brass stanchions with velvet ropes and that some manager would be creating a website to sell them.)

KF grabs the meeting room keyboard and pulls up the internet. He then starts to speak aloud and type, “ www dot used brass stanchions dot com.” That web address came up empty. Again, “www dot movie theater brass stanchions not being used for sale dot com.” Nothing. He tried several variations on this, each time coming up with a longer, more complicated string of words that he would try to turn into a website address. Of course, nothing came up. Hugh stopped him and said, “I will continue the search at my desk.”

In the end, we bought a bunch of new stanchions and aged them so that they would look old. Not old like they were in a movie theater closet for years, but you get my point.

Now at work, when someone asks how to locate an odd material or obscure product, like a pair of 6’ tall fuzzy dice, we will follow that up with, “Have you tried www.GiantSixFootFuzzyDice.com or www.StoreThatSellsFuzzyDiceThatArentSmallButSixFootCube.com?”

Below is an image of stanchion that were not bought used and use in a themed structure. 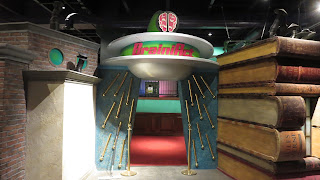 I used to work for the Government at the Department of redundancy department.