Remember how f'ing hot this last summer was?  And do remember that one time I was a dick to you and you wanted to get me back?  These two unrelated statements came together a number of months ago. I had been leaving my car windows down because of the heat.  I went out to my car one afternoon and as I sat in the driver's seat, something seemed... odd. I then realized that the steering wheel was sticky. And so was the dash. And the seat.  Someone had, on purpose or accidentally, thrown a cup of pop in my car. It was brown and sticky. It fucking pissed me off.

Someone thought it was pretty funny to coat the inside of my car with pop or maybe they were carrying a soda pop when all of a sudden they were attacked by a mountain lion and their only chance to survive was to ditch their Coke and run like the dickens.

For about two days I would get in my car in the morning and be reminded of the prank. (Yeah, I kept forgetting to clean it out.) I'd think about it on my way to work... if it was an accident, the person would have told be about it. If it was a joke, they were just sitting back and waiting for the right moment to ask me about my sticky mess and they would have a good laugh. So I waited for an answer.

And on the third day I got my answer.

I needed to throw some crap in my back seat when I saw this: 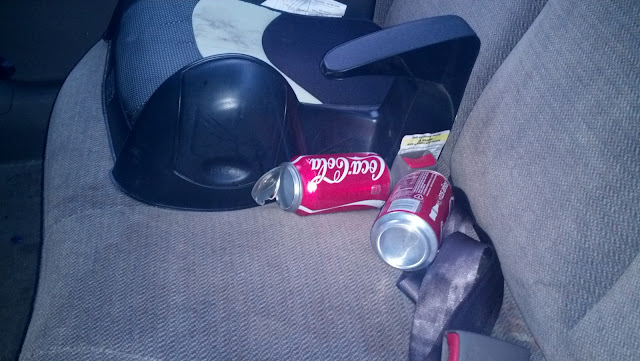 There are two Coke cans. The one without the lid blown off is from Puerto Rico. Keegan brought it back to show me the smaller can and that their Coke contains less salt and more (real) sugar. The one with the blown off top is an American Coke can with more salt and less sugar.  I was going to do a post on HolyJuan about how American Coke is salty so you drink more.

The heat caused the can to expand and blow the top off, which happened to shoot right between the driver and passenger seats and all over the dash and steering wheel.

In the end, my co-workers were not assholes. There was no mountain lion. And I never did that post on HolyJuan about the salt levels of American Coke vs Puerto Rico Coke. Unless you count this one.

I need some scientists to tell me if the additional salt in American Coke would cause it to expand more and thus blow off the top. Or maybe the can was engineered differently.  I'll call this the Coke Challenge. Get to work scientists!

Sorry. Someone posted the following comment and I hit delete instead of publish.

"This was a communist conspiracy, and you didn't even recognize it.

Down with the USSR!"