How to Use the Automatic Soap Dispenser 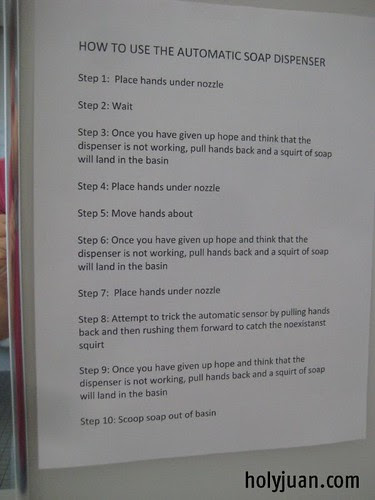 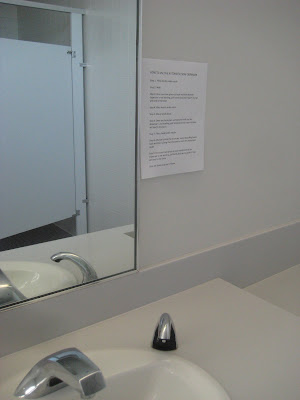 It's funny because it's true!

I'll "squirt in the basin." Isn't that right ladies?

I think the solution should be getting both your hands under dispenser..One in normal distance and other below that..Then give hope and remove the upper hand..Soap should fall in the lower hand :P

Its still funny that to use an "automatic" dispenser you would need both hands. the mechanical old soap dispenser worked perfectly with one hand.

But with the mechanical version, you had to touch it after every other person touched it with their poorly washed poo hands, icky!

Yeah, but after you touch that yucky dispenser with your already yucky hands, you wash them.

The thing I usually don't like is having to turn off the faucet with my clean hands, or opening the bathroom door to get out.

the best soap dispenser's manual in the world.

Uhhh, this NEVER occurs when I use an automatic soap dispenser.

This describes my last relationship if you replace 'Automatic Soap Dispenser' with my ex-girlfriend's name, replace 'dispenser' with 'ability to care for other people', 'hands' with 'affection', 'soap/squirt' with 'glimmer of caring', and 'basin' with 'your miserable life'.

Joban must be some kind of superheo

Why do girls always think everything is cute? do they just lack the words to say it was hilarious? or... cool? or... oh I don't know... sweet? pretty? hot? ok fine. cute. I guess cute must mean all of those things at different times. it's like the new version of good.
"awwww look at it! it's so good!"
"XD HAHA! THAT'S GOOD!"
"wow. you look good."

damn, dude. that poster is fish!
just look at the signs and letters on that piece of dead wood fiber.

I'd squirt if you repeatedly pumped my dispenser too.

Oh Dave, you're so eloquent...

Ok, this has never happened to me. I have never heard of this happening to anyone. Yeah, it's funny, but it is so far from truth.

The author of this document should be writing Help files for Microsoft.

AHAHA! This could be on passiveaggressivenotes! stumbled...

shopped.. you can see the pixels

Its sad..cuz I work in a company that helps take care of Mentally challenged people and they know how to use these soap dispensers with no Problem!!!....Im thinking that they are smarter than us sometimes!! :0)

I thought that inventions were supposed to better man kind? lol

hahahahaha that is so true, happens to me every time a bathroom has one of those things.

I'm crazier than a snakes armpit