I read books with my kid every night. As he looks for books to read, he usually asks, “What book do you want to read?” Whichever one I pick, he says that he doesn’t want to read that one and continues to search in his collection of 1,543 books for the one which is stuck between the bookcase and the wall. Looking for two books to read each night takes longer than actually reading them. Especially if I read the first page and then accidentally skip to the last. Hey, it works with Atlas Shrugged.

One book I like and one that you might remember fondly from your childhood is Goodnight Moon by Margaret Wise Brown with pictures by Clement Hurd. Basically it is a story about a rabbit stalling so that he doesn’t have to go to sleep.

The little rabbit in the story says goodnight to all the things in his room as he slowly doses off.

But there is one thing to which he does not say goodnight.

It’s a black and white painting of a rabbit fishing. It’s hanging behind the old woman whispering hush. 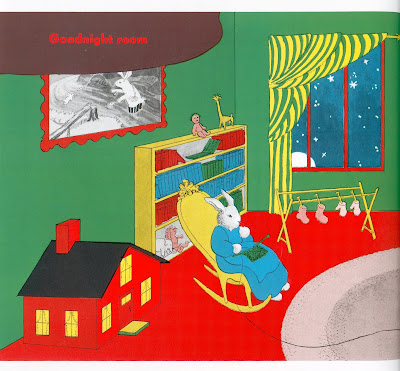 It’s cute. The rabbit even has waders on. That’s really cute. And the rabbit has a carrot on the end of his line as bait.

Yes. A carrot. Because if you take a close look, you will see that the fisherrabbit is fishing for BUNNIES! 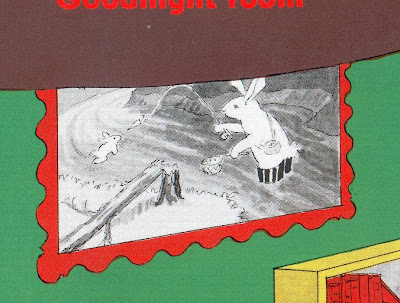 What the hell is up with that? That’s cannibalism! Or Rabbitbalism. He’s going to catch him, swoop him up with the net, shove him in his wicker fish (bunny) creel, take him home and eat him. Hopefully he’ll at least cook the cute little bastard.

I could understand it if perhaps the bunny was the runt of the litter and the momma rabbit had to eat it… that is natural. This is cruel and I just don’t get what the hell Clement Hurd was trying to illustrate.

Which is why I’ve taken to pointing it out to my son and telling him that he has two choices in life: either he can be the fisherrabbit or he can be the rabbit in the stream. After he stops crying, I hug him and comfort him with promises of carrots for breakfast.

Oh, it's probably bad form to defuse a perfectly good rant with the facts, but the painting in question is an inside joke. There's another MWBrown book called "Runaway Bunny", in which a young bunny boy tells his mother he's going to do things like turn himself into a boat, or a bird, or a fish. His mother tops each one by turning herself into wind, or a tree, or a fisher, and in each case, brining him back to her.

Now if you want to write a whole post on how freaking creepy that book is, especially in a Pink Floyd Mama's-going-to-keep-you-under-her-wing way, go right ahead. My wife and I got "lost" that book in our last move....

Wow. Thanks. That explains a lot.

I have read that book before, but never made the connection.

Well, got to go now. Mom is calling.

We have both and I've read them both many times. Runaway Bunny is weird.

I've noticed that too. Always confused me.