The Big Yummy vs The Big Weenie

In 1999, COSI opened at its riverfront location in downtown Columbus. Once the building opened, the COSI Design and Production Studio, the group of folks who envisioned, designed, built, and installed COSI in its new location, broke up into three groups. Some people left to pursue other projects. Others remained in-house to help maintain the newly opened building. And the last bit became what was to be COSI Studio; a group of folks developing new exhibits for COSI and for other science museums, children’s play areas, and aquariums.

The first exhibit this group worked on was Space, which opened the following year at COSI. But during this time, COSI was approached by several Ohio Agricultural groups to help promote healthy eating and Ohio farmers. What finally came of this was “The Big Yummy,” a lunchtime, animatronic talent show with various foods competing to win The Big Yummy award.   In 30 minutes, kids were rotated in, they would eat their lunch, watch the show, and then cycled out.
The show was even set up with three different endings that were determined by the volume of the audience’s applause. (The Pinto and Soy Beans almost always won due to the fart machines hidden in the lunch seats that were activated during the beans’ performance.)

At the outset of the project, we worked on the concept and the script. We designed the space and determined the necessary refurbishment and modifications. We developed the characters and worked on their art direction with the animatronic company.  The show had several songs, an original score and when the script was finalized, we flew out to California to a recording studio to record the music and voice actors.

This is where I stop and tell you that up until now, you think I have been talking about The Big Yummy, but I haven’t. I’ve been talking about The Big Weenie. The show we worked on up until this point was called The Big Weenie. The logo, the songs, the lyrics, the characters’ lines, and even the grand prize trophy all referenced The Big Weenie. In the science museum world, a "weenie" was the best exhibit in the gallery, the one that got the most attention. Weenie is also a food, so that was part of it. It’s also laughingly enjoyable to say out loud. Try it… weenieweenieweenie See! But not everyone thought it was a good choice of word.

As Allen and I flew westward to Burbank, California and the Theta Sound Studio, there was a management meeting at COSI. Even though we had been working on The Big Weenie for several months, management was unaware of the name or perhaps their ears finally perked up when it was mentioned at this meeting. After we landed, we went to the Studio and arrived mid-session as the musicians were laying down the music. As we were settling in and working on some last-minute edits, Allen got a call from COSI. We were told that the name “Weenie” was absolutely not allowed and that any reference to it must be removed from the show. I assume this was because “weenie” can also mean “penis.” The Big Penis show.

After Allen hung up and told me this, we started to realize the situation we were in. This wasn’t just a simple name change. The word Weenie was throughout the lyrics, usually at the end of a line. This meant that our replacement word needed to be:
-two syllables
-end in the “ie” sound
-be food related
-it had to fit in the flow of everything
-determined in the next 18 hours before the actors were in the studio to record their lines and songs
-not have anything to do with penis

What we came up with in those first few hours was, “The Big Smörgie,” short for Smörgåsbord. It fit with most the replacement criteria, except that it was a made-up word and didn’t quote flow. But that was the best we had. And the best was mediocre.

Allen had another meeting across town, so he left me at the studio to oversee the recording and to make sure we didn’t have any other odd references in the script to Weenie.

Allen called twenty minutes later in LA traffic. He had an idea. He told me about Jerry’s Famous Deli. It’s a landmark in LA and they have an awesome menu. On that menu is (was) a delicious dessert (or breakfast item depending on how you wanted to frame it) item that consisted of a cream cheese and jelly sandwich that was soaked in egg and deep fried.

The item was called a Yummy.

The Big Yummy! Yummy was the perfect replacement word! It met all the criteria. It was the next best, closest thing to Weenie that we were going to get. We swapped out all the Weenies with Yummys in the script, changed the logo, and moved on.

There are still secret stashes of The Big Weenie floating around. Sketches. Original scripts. Logo development concepts. I think the biggest one in clear sight is that the trophy the “winner” of the show received is a hot dog or weenie.

In 2004, a financially burdened COSI had a failed tax levy and the institution made some major cuts. The Big Yummy was a staff intensive show and went on the chopping block. LifeFormations, the animatronic company, bought back several of the animatronics and repurposed them at different venues. One of the most popular is Corn Cob Bob and Pat O’Butter at Jungle Jim’s in Cincinnati. You can still see them there at the front door today. 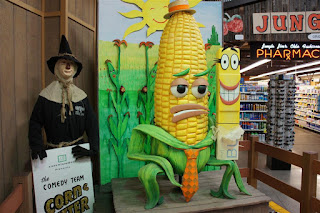 I was extremely fortunate to work on The Big Yummy project. There were many, many creative people involved that I still interact with today. We all made something outlandishly creative and heartrendingly original. When I am at COSI, I will go into that room and look for the hints and shadowed fingerprints that were left behind by that experience. Seams in the drywall. Bumps under the carpet. They are there if you know where to look. But the biggest, lasting impression, which you can also see, if you know where to look, is on me.

Fortune and Fame,
A heartbeat away,
Lights flashing your name,
This is your day,
It’s the Weenie,
The Big Weenie,
Ennie, meanie, miney, moe,
Where will the Big Weenie go?

Thank you for posting this! I read about this show several years ago on LifeFormation's blog, and I was mesmerized by it. Would you happen to have a full video of the performance? Aside from Corn Cob Bob and Pat O'Butter, what happened to the other animatronics?