There are three ways to climb The Mountain at night: The Baby Bear Path, The Momma Bear Path and the Papa Bear Path.

The Baby Bear Path is a sucker’s bet.  It is the main path up the mountain. It’s wide. You can see it in the moon light. There isn’t much to trip you up besides the gullies that form from erosion. Problem is you have to park in the lot or down near the front of the park and cops tend to radio in your license plate when they drive through the park.  Don’t take The Baby Bear Path.

The Papa Bear Path is not recommended.  It’s barely a rabbit trail. It goes close to the edge of the mountain. I assume there is poison ivy.  Avoid.

The Mama Bear Path is our path.  Park your car on Mt. Pleasant Avenue.  Not close to the mountain, but maybe a block back. Sometime two or three cars have to park.  It’s best not to wait for everyone on the street.  Once you park, head towards the mountain and look for the reflection of headlights.  Make sure you know where you are going to attack the side of the hill.  There are several spot to scramble up this hill. Shit, there’s even a set of concrete stairs that are older than you and I put together. Find your spot. Commit. Wait for the silence and darkness.  Run. Scramble.

You made it.  If there are others, wait.  It’s best to walk in a line together. Watch as they wait to cross the street.  See if they picked a bad place to climb where a tree has fallen and they have to climb over.

I assume the Mama Bear Path is pretty straightforward in the daylight. In the dark you have to make assumptions and guesses.  That path has been there for years and the trees have decided to give the path a wide berth so you aim away from trees.  The weeds grow up to the path, but not over it.  There are many roots, walk by lifting your feet up high.  Listen for the leader to give instructions.  “Watch the roots.” “Fallen tree.” “Where’s Russ?”

The Mama Bear Path used to pass by a rotting tree.  The tree succumb to time and wet and gravity. But for a while, the rotting tree was host to a glowing fungus. We stop and look for the fungus. Sometimes it was hard to see and other nights… other nights it almost cast shadows it was so bright. We would touch it, but no one thought to damage it.
The Mama Bear Path intersected the Baby Bear Path about half way up The Mountain where it took at 90 degree turn.  At this point, anyone at the bottom of the path looking up would not be able to see you.

From this vantage point, you can look up the rest of the path and see a clear space through the trees and into the night.  Lancaster puts out a good bit of light at night, but not enough to block out the stars. Keep climbing.

At the top of The Mountain there is another 90 degree turn and some concrete steps. There are metal handrails buried in the stone.  Erosion has made most of them worthless. Keep climbing, you are almost there.
The last few steps are covered by trees so it is a bit like coming out of a tunnel.  The warmer air from the city below loses a battle with the sandstone face and is pushed up and over the edge. It’s refreshing and cooling evaporating the sweat from the climb. The air smells like Lancaster.  During Fairfield County Fair time it smells of Italian sausage, cotton candy and horse.

At the top,  the dudes usually do The Ceremonial. Face away from the cliff edge, find a tree and pee.  Try not to pee where someone else has recently performed The Ceremonial.

There’s an iron rail that helps to keep people that follow rules back from the edge.  Duck under the rail and find a spot to sit. If there are beers, thank the person that carried them up. Now is also a good time to have a cigarette if you are into such things.

Conversation.  Observations about blinking lights in the distance or cops pulling cars over. Pretty soon, an hour or two will have passed.  The beer will be gone and Kit will want something to eat.
Make your way back down. Careful, it’s steep. Make sure you look for cars before you go sprinting down the hill and into the road.

Go to your car. Get something to eat and share more conversation. Head home and go to bed.
Even though you’ve changed clothes and brushed your teeth, you can still smell The Mountain. 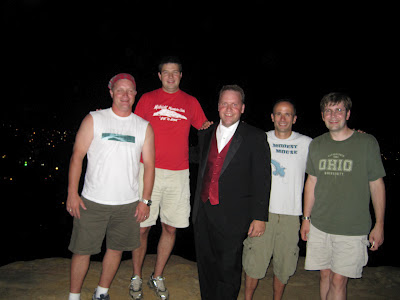 I'm ready to go back up right now. The beer we've drank, the people we've met and like you said the converstations.
Only two things have really changed. We're fatter now and the reasons why someone couldn't make it changed. Hey where is "PersonX"? We left him at the bar he was trying to leave with that one girl morphed into, his kid has an 8am baseball game and his wife said he couldn't go.