Belgian scientist Dr. Mark Drascht believes the Earth is doomed. “Whether by global warming or cooling, nuclear terrorism or just plain stupidity, we are all going to be dead in the next 100 years.”

When the world is wiped clean, Dr. Drascht doesn’t want our history to be destroyed as well. Dr. Drascht is creating a time capsule, and it is not just your basic newspaper, deck of playing cards and Twinkies in a concrete box either. He’s creating a frozen, biological “life capsule,” so that future alien space explorers can find us and perhaps revive our species.

“It’s a kind of frozen Noah’s Ark. I’ve even included doves and an olive tree!”

Dr. Drascht has plans to collect over two hundred mammals and birds, sixty reptiles and six hundred plant species for his life capsule. “Timing is very important. We can only afford to make one trip to the South Pole, and the animals and plants must be frozen alive at the site. It’s one hell of a coordination feat.”

Using data from the past 200 years, Dr. Drascht has located a spot 100 miles from the South Pole that he believes will remain frozen for the next 10,000 years. “Plate tectonics in that area will continue to rotate around the pole. This exact spot will allow our specimens to remain at sub-zero temperatures for the next ten millennia. Basically, it is a maintenance-free freezer.” 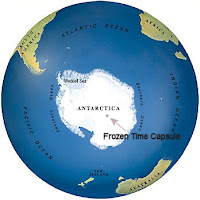 Dr. Drascht will transport all the living biological specimens to Antarctica, where they will be flash frozen alive and placed into the life capsule. “We are actually going to use the animals and two human specimens to help dig the area necessary for the life capsule. We’ve been working on training the animals for the dig. We’ve modified elk horns and squirrels’ teeth to assist with digging in the rock hard ice. For the humans, we've procured a number of high-tech digging tools, including two highly-modified Garden Weasels (tm) originally designed for the military.”

There seems to be an endless supply of males who are willing to be flash frozen alive. Finding women who want to be frozen alive is a bit more difficult for Dr. Drascht. “I’ve received applications from two women. One was 75 years old, and the other woman was over 125 kilos (275 pounds.) We’d need to carve a larger hole in the ice for that type of specimen!”

The original plan for the life capsule has changed over the years, but Dr. Drascht is still hopeful. “We originally planned on separate ice caverns for each type of specimen, but the budget has deemed otherwise.” Dr. Drascht’s team will now dig just one hole or “life pit” and place all the specimens in one space. According to Drascht, the biggest challenge will be to quickly freeze the animal specimens before the carnivores eat the herbivores. "The plan is to ensure that all the predators are very well fed prior to being placed into the life pit. I’m considering feeding the animals with protein infused pages from a set of encyclopedias so the future autopsies will reveal a summation of Earth’s history."

One other hole will be used for the “Demise Database” equipment. Drascht is not looking to preserve technology, but rather to create an historical database, so that alien space travelers will know why the planet became devoid of life forms. “At the life pit, we are setting up a satellite internet connection and a printer. Once a week, we will download and print the contents of cnn.com and one random site, pornography excluded, so that we can have a hard copy of Earth’s demise.” There are obvious technological issues with electronics at the South Pole, but printing in sub-zero temperatures won’t be a problem. “We’ve mixed the printer ink with a jellyfish-based anti-freeze. It keeps the ink from freezing and really stretches out our ink inventory. That printer ink is expensive!”

Dr. Drascht is justifiably excited about the earth's imminent demise. "It's all too much, really. I just wish the dinosaurs had possessed brains bigger than peas so that they could have created life capsules to clue us in on their extinction."