The next weekend, something else was planned. This time I wasn’t given any details. Probably a smart move. I was told to go to John’s apartment where a new surprise was going to take place. Miss Sally and I headed over. I decided to wear my orange sweater with a blue stripe. John and his brother Chris were hanging out. We chit chatted for a few minutes, acting casual and waiting for a stripper or a horse or whatever to show up at the door.

There was a ruckus at the back door and in through the kitchen stormed eight chicks dressed in black and wearing masks and bandanas. John was quickly subdued, handcuffed and blindfolded. This was going to be interesting. 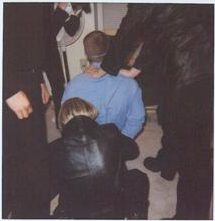 Until they did the same to me. 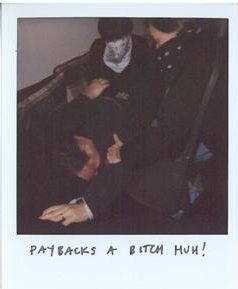 As I was cuffed and blindfolded, I was called a traitor and a sneak. Submerged in total darkness and tightly bound, we were dragged out of the house and put in separate cars.

We stopped about five or six times. At the end of the night, we were walked across a busy street, into a crowded bar and unmasked. Many of our friends were there. A cake and gifts for John were spread out along with 30 or so Polaroid photos from the evening.

It was a very memorable night. And I’m sure I was supposed to have learned a lesson from the evening, but I can’t tell you what it was.

Later on I realized that Miss Sally knew what was going to happen that night and she didn’t let on. I’m not sure if that is a good thing or a bad thing.

Oh yeah. I changed a few facts in this story.

A. It was actually seven girls and one gay guy that kidnapped us
B. I wore a blue sweater with an orange stripe
C. The handcuffs were the really cheap plastic variety and the blindfolds were the type Mrs. Howell would have worn. I had to re-snap my cuffs on every three minutes. We were very willing participants.

See the photos of the night here: